This week’s HCCI report again underscores the major driver of health costs in the US: provider prices. The late, great Uwe Reinhardt was right when he said “It’s the Prices, Stupid”. Here in Massachusetts, some of the most detailed work has been done on the topic, and it’s the same story.

Back in 2010, the MA Attorney General’s Office published its first cost trends report.

Among the findings was that Tufts Health Plan saw spending increases driven not by utilization rates, but by the unit price of service, and the mix of service. By “Provider Mix”, that’s a fancy way of saying that people were going to more expensive doctors and hospitals.

In the same report, the AGO found that it was perhaps more dramatic for Harvard Pilgrim, where price accounted for nearly 85% of spending increased from 2004 to 2008.

For the state’s largest insurer, Blue Cross, price wasn’t as dominant, though it still amounted to more than half. 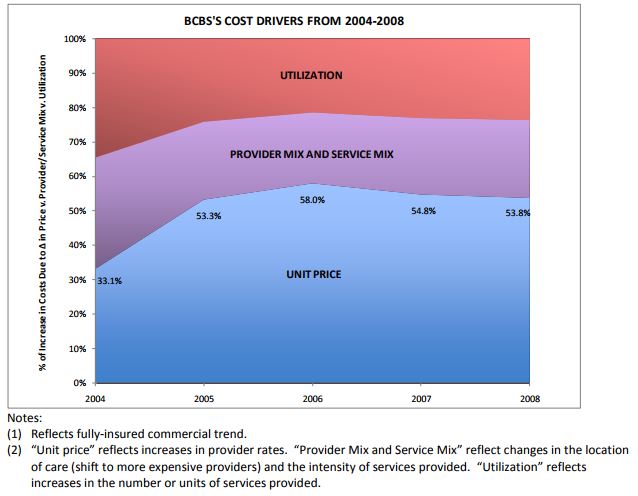 The contribution of unit price to total spending has been closely tracked in MA, and the situation hasn’t changed. Price still drives total spending. Knowing that the situation seems to be the same all across the country, I have to ask “What does this mean for future costs and cost containment efforts?”

Are we just killing time until some serious price reduction effort will be forced upon us? Will we continue in the direction of pay-for-value such as bundled payments, despite efforts in the other direction in Washington?

Previous
Our Take: Top HealthCare Stories of 2017
Next
Winners and Losers in 2018 ACA Exchange Enrollment