Far from perfect competition: A Look into the Market Shares of our Nation’s Leading Health Insurance Companies

By now, we have all heard the term “Medicare for All” as the 2020 democratic presidential primaries draw closer and more blue candidates declare their bid for the presidency. This cycle is unique 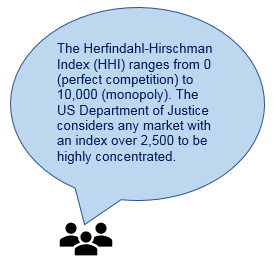 for many reasons, one being that an unprecedented number of presidential hopefuls have publicly backed the idea of a single-payer healthcare system, quite a feat considering no country in the world has ever voluntarily gotten rid of $1.2 trillion-a-year industry. With that said, Freedman HealthCare (FHC) grew curious to know the market share percentages of commercial health insurance companies across the country, particularly those facing the least amount of competition. 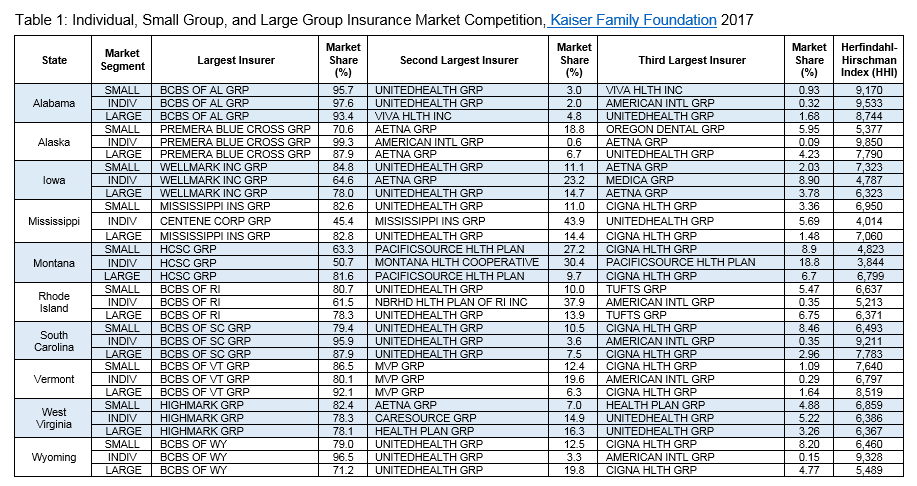 This map displays variably concentrated payer markets state-to-state. When comparing this map with the large group figures in Table 1, it makes sense that states like Alabama and Wyoming only have two or fewer commercial health insurers with at least 5% market share (since these markets are clearly highly concentrated). Of course, the states with 5-8 health insurers with that least 5% market share (i.e. Virginia, Connecticut, Pennsylvania, New York, and Washington state) have greater competition and have a lower HHI. That said, market competition may be overestimated in some of these lesser concentrated states. For example, statewide, Pennsylvania is “moderately concentrated”, however it consists of two major separate and highly concentrated markets, in the west (Pittsburgh) and the east (Philadelphia). The same can be said for New York state.

Overall, most states have 3-4 health insurance firms operating with greater than 5% market share. However, even these states are moderately to highly concentrated, averaging 1,500-2,500 HHI. Since HHI shows how evenly (or unevenly) market shares are distributed, it’s clear that large group health insurance firms across the country generally play in non-competitive markets.

So, what are the driving factors behind these widespread highly concentrated markets?  A 2015 Brookings report entitled Early Assessment of Competition in the Health Insurance Marketplace found that population size and density are key determinants of insurer participation (Brookings, 2015). This explains why many of the highly concentrated commercial health insurance markets described in Table 1 overlap with some of the least densely populated regions of the country, like Alaska, Wyoming and Vermont. Additionally, mergers, tight state regulatory requirements, and the high cost of developing physician networks all help drive out the competition, which tends to lead to higher premiums for consumers and lower payments for physician services (Robeznieks, 2017).

A lack of competition in health insurer markets is not in the best interests of patients or physicians…If a health insurer merger is likely to erode competition, employers and patients may be charged higher than competitive premiums, and physicians may be pressured to accept unfair terms that undermine their role as patient advocates and their ability to provide high-quality care,” (AMA, 2015). (It’s important to note that health insurers generally have their prices (i.e., premiums) regulated by state insurance officials, in contrast to the prices of providers. In this sense, insurer consolidation may be less harmful than provider consolidation.)

What, then, is the solution? A single-payer healthcare system would strip the need of competition in the health insurance market completely, but we estimate the plausibility of a Medicare-for-All-type system is low. According to the 2017 AMA annual report, Competition in Health Insurance: A Comprehensive Study of U.S. Markets, insurers would be forced to keep premiums in check if entry were easier. In addition, the AMA suggests that empowering lawmakers and policymakers with the knowledge of potentially harmful mergers and acquisitions among private payers could help prevent further market concentration as well (AMA, 2015).

Although these solutions vary in their complexity and popularity, one thing is certain: any health care reform that is based on market principles must encourage real competition among private payers – and others – to ensure lower costs and higher quality for patients, families, employers, and providers alike.

Previous
All Politics, Even in Healthcare, Is Local: A look at NRHI’s latest report on healthcare cost variation in 6 regions
Next
Inconsistent Data Sets: ETL Process for CMS Quality Data