Maureen Mustard MBA served as Chair of SAPCDAC and previously was the Director of Healthcare Analytics at the New Hampshire Insurance Department. John Freedman MD MBA is President and CEO of Freedman HealthCare, which has advised APCD efforts in 30 states.

This is an important inflection point for APCDs, as they are reaching a critical mass nationally. Limitations in the existing regulations, particularly the lack of a standard data format, has challenged widespread use of APCD data. The work of the SAPCDAC was intended to improve the use of APCD data across jurisdictions and state lines and open a path for insurers and large employers to contribute data more easily to APCDs.

This article provides an examination of the work of the committee, its recommendations and how they could change the use and efficiency of APCDs moving forward.

Background – APCDs, ERISA, and the CAA

APCDs have been around since 1998, and have the potential to provide comprehensive, easy to analyze, longitudinal datasets on the use of healthcare services and their cost. These datasets, can help inform broader audiences, including policymakers, researchers and other stakeholders.

By 2015, more than a dozen states had established APCDs, with a dozen more in some stage of planning or implementation. APCD data are routinely collected from private health plans covering residents, fully-insured plans (i.e., issued by licensed health insurers operating under state law) and self-funded ones (i.e., established by a plan sponsor, usually an employer, managed by a third-party administrator, and operating under federal law).

In 2016, a legal battle between Liberty Mutual (a self-funded employer) and Vermont’s APCD went all the way to the Supreme Court, which ruled in a 5-2 decision that the federal Employee Retirement Income Securities Act of 1974 (ERISA) blocks Vermont’s state APCD law as applied to self-funded plans.

ERISA is a federal law which governs a wide variety of employee benefits including health care coverage. ERISA “preempts” any state laws that conflict with ERISA’s federal oversight, as the Supreme Court ruled in the Vermont case. All ERISA self-funded health plans are regulated by the DOL, unlike fully-insured health plans that fall under the purview of state laws.

As a result of the Supreme Court decision, many APCD data submissions were put on hold until the data submitters could segregate and ultimately remove all the impacted self-funded data, which states could no longer require submitting.  Since 2016, many states have put in place a voluntary process for self-funded plan sponsors to opt-in to data submission. Although some plans have opted in, most states experienced a sharp reduction in the claims data.

In 2018 and 2019, with health care costs rising, surprise billing in the news, and under pressure to act, Congress heard testimony by experts advocating for the need for healthcare reform. APCDs were highlighted in the testimony as an important tool to drive reform, with the potential to shed greater transparency on healthcare costs. Experts highlighted the importance of improved data collection by state APCDs in order to support data driven reform efforts at the state and federal level, including the need for a standardized data format. 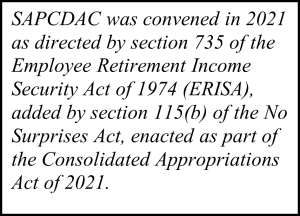 Congress amended ERISA to require the Secretary of Labor to create a standardized process for voluntary data collection for APCDs from self-insured employers. It created SAPCDAC to make recommendations to guide the DOL’s new rules. Along with other provisions affecting APCDs, these changes were included in the Consolidated Appropriations Act of 2020 (CAA,  see box).

A second provision of Section 115 of the Consolidated Appropriations Act established a grant program for state APCD funding ($2.5 million per state over 3 years for the creation or enhancement of a state APCD). The grant provision still awaits Congressional appropriation.

See Part II to learn more about the inner workings of the SAPCDAC and whether they achieved their vision of an improved data collection process for APCDs and the expansion of APCDs across states nationwide.

Part II of this series will cover the work the SAPCDAC has done to date and the recommendations the committee has made to achieve the vision of improving APCDs as a tool in healthcare cost reform efforts.