Maureen Mustard MBA served as Chair of SAPCDAC and previously was the Director of Healthcare Analytics at the New Hampshire Insurance Department. John Freedman MD MBA is President and CEO of Freedman HealthCare, which has advised APCD efforts in 30 states.

This is Part II of a comprehensive review of the history, work, and recommendations of the State All-Payer Claims Database Advisory Committee (SAPCDAC ) and its efforts to expand the use and efficiency of APCD data. Part I lays out the history of APCDs and Part II focuses on the work of the committee. 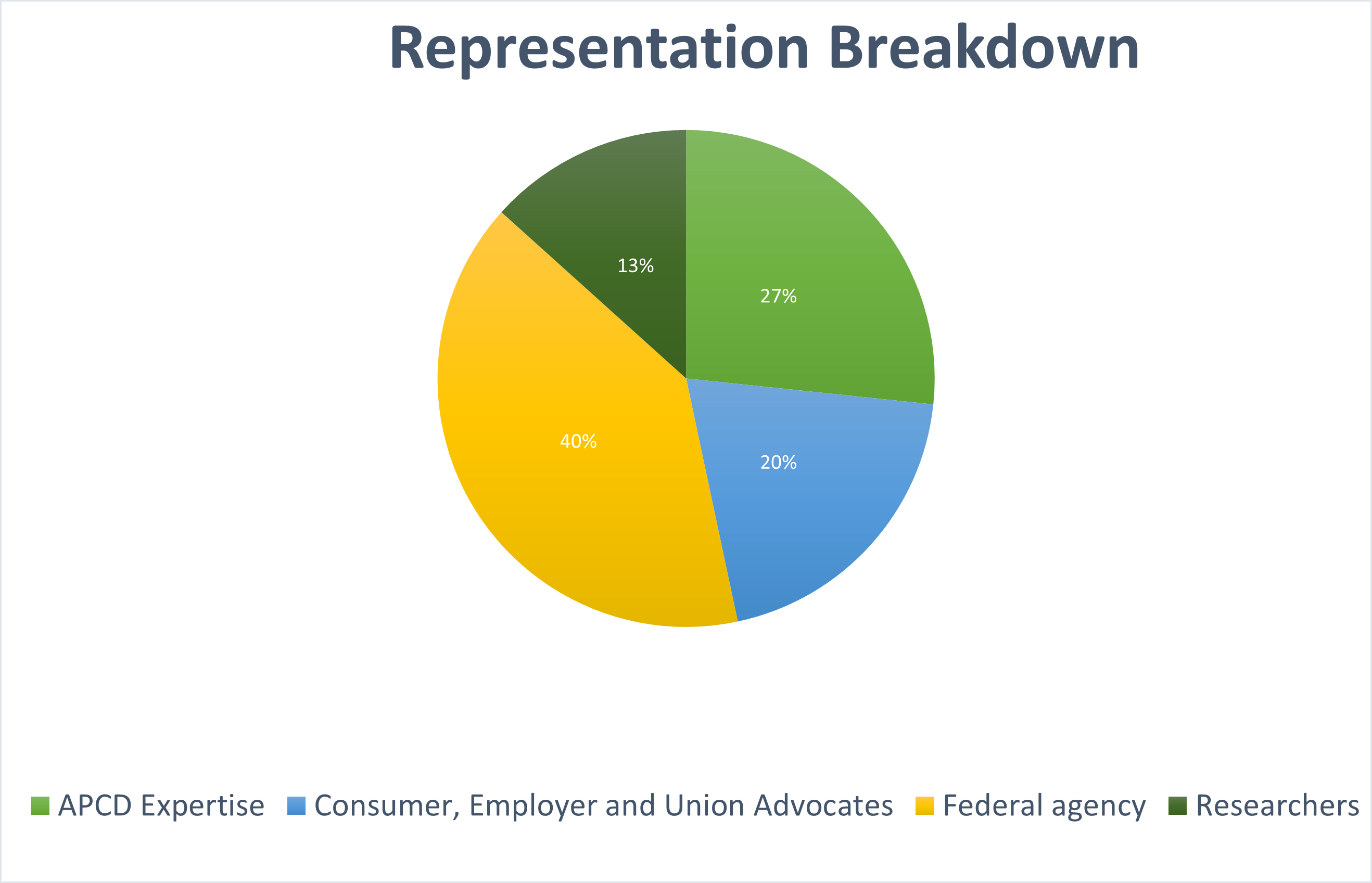 From its initial onset, the SAPCDAC was a true working body, with individual members contributing significant time to attend meetings, working through details in subcommittees, and writing the recommendations report. All members contributed to writing and editing on a compressed schedule. Although most federal advisory committees have three years to meet and report, SAPCDAC completed its work in just three intense months. 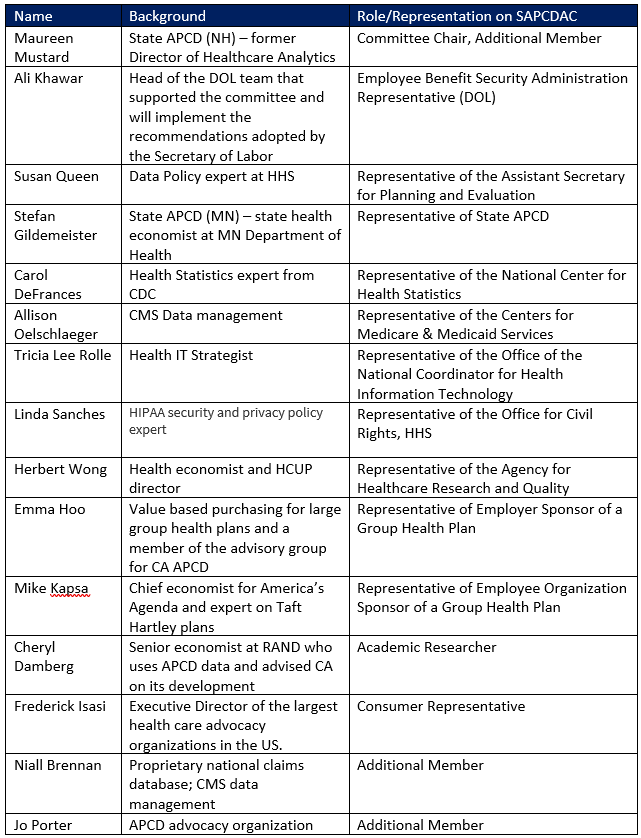 As the first meeting of the SAPCDAC did not take place until May 19, it became obvious that the goal of completing the report by June 25, 2021, as envisioned in the CAA, was not doable. Still, with time of the essence, the compressed timeline didn’t stop the members from completing the work necessary to develop thoughtful recommendations. Over 8 weeks, SAPCDAC met 6 times in full and an additional 30 times in subcommittees. The Department of Labor’s Employee Benefits Security Administration was responsible for oversight of the Advisory Committee and provided the Committee with administrative assistance and legal advice.  SAPCDAC submitted its report to DOL in August. After DOL finalized edits and approvals, the final report was published on October 20, 2021.

The Committee addressed the issue of standardizing data by recommending adoption of the format known as APCD-CDL (APCD Common Data Layout), created through a 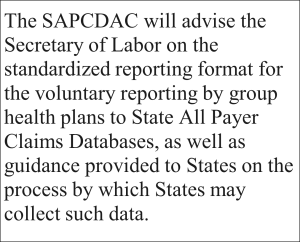 collaboration of APCD states and the APCD Council with input from the stakeholder community over several years. SAPCDAC recognized that claims data and analytic needs will evolve and so recommended that DOL identify a governing body to oversee changes to the standards over time.

In furtherance of standardization, the Committee’s recommendations for the self-funded plans were also applied to recommendations for the fully-insured data submissions so that there would not be separate standards and processes for data from the two types of plans. With a common format across states, any perceived reporting and compliance burden would be reduced, particularly for those data submitters operating across multiple states. Also, a recommended uniform minimum standard for security and privacy along with a simplified standardized opt-in process would allow a multi-state employer to opt-in to all state APCDs without needing to comply with states’ varying rules or security practices.

During the Committee’s meetings, many stakeholders advocated for more impactful recommendations than a uniform opt-in, which many felt would not significantly boost the current data volume for ERISA preempted plans.  SAPCDAC members debated the issue of voluntary submission and how to maximize participation by plans. Although Committee members supported an opt-out or other more encouraging voluntary methods, the DOL legal team advised that “voluntary” must be literally interpreted.  Furthermore, lobbyists representing large employer groups opposed any recommendation other than a true voluntary opt-in, explicitly stating their intention to litigate any perceived overreach.

As required by the CAA, the recommendations report was addressed to the Secretary of Labor, but the Committee members understood that SAPCDAC had a much broader audience: members of Congress, researchers, healthcare cost analysts, and many other interested stakeholders.  The Committee took the opportunity to describe a vision for APCD data use and the efforts underway in states, and why the work is important to so many.

Our hope is that the DOL will amplify the message to employers that opting in to voluntary APCD data submission is part of an effective strategy to address rising health care costs and that many employers will participate in the opt-in process.  The true impact will not be known until the DOL promulgates its rules for the standardized data layout and opt-in process for self-funded plans and states adopt the recommended standards.

The Committee heard written and oral testimony from many experts, some of which went beyond the scope of the SAPCDAC’s charter from DOL and far more than could be included in the recommendations report.   For instance,

The heart of the committee’s work is expanding use of APCDs by making the data more comprehensive and accessible. DOL must consider actions and language to encourage plan sponsor participation in data submission.  For example, the fiduciary obligation of plan sponsors could suggest that if they are truly acting in the best interest of beneficiaries, they should be sharing data which contributes to improving the quality and access to care as well as lowering costs.

Although the DOL cannot directly regulate a TPA, it can expand or change the expectations of a plan sponsor whose primary responsibility as a fiduciary is to act in the best interest of participants and beneficiaries and for the exclusive purpose of providing benefits and paying plan expenses (1). As recently as 2021, the DOL changed the fiduciary rule for retirement plan sponsors with a great deal of opposition from brokers and investment firms since the changes lowered the commissions they could be paid (2).   For retirement accounts, eliminating back door fees and increasing transparency worked to reduce biased advice that was estimated to cost retirement accounts $17 billion a year.  Similar action could help data sharing with APCDs, allowing plan sponsors to improve transparency and reduce excessive fees that are passed along to health plan participants.

The SAPCDAC members encouraged the DOL to continue the conversation on how best to encourage and enhance the use of claims data. Legally, the committee’s work concluded with report submission.

The report was truly a collaboration among a group of highly committed national experts and officials who brought their energy and insight to this process of advancing access to health data. The SAPCDAC report reflects some of the best thinking on this subject and sets the stage for a broad and thoughtful public discussion about how to expand and enhance these ever more essential data resources.